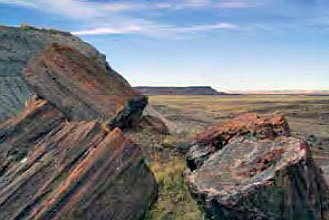 Petrified wood is a fossil. It forms when plant material is buried by sediment and protected from decay by oxygen and organisms. Then, groundwater rich in dissolved solids flows through the sediment replacing the original plant material with silica, calcite, pyrite or another inorganic material. The result is a fossil of the original woody material that often exhibits preserved details of the bark, wood and cellular structures.

Some specimens of petrified wood are such accurate preservations that people do not realize they are fossils until they pick them up and are shocked by their weight. These specimens with near perfect preservation are unusual; however, specimens that exhibit clearly recognizable bark and woody structures are very common. 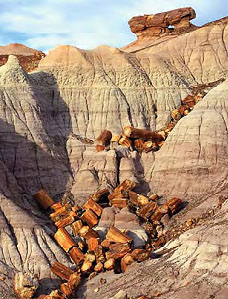 The most famous locality for observing petrified wood is Petrified Forest National Park near the community of Holbrook in northeastern Arizona. About 225 million years ago this area was a lowland with a tropical climate and covered by a dense forest. Rivers flooded by tropical rain storms washed mud and other sediments into the lowlands. Enormous coniferous trees up to 9 feet in diameter and 200 feet tall lived and died in these lowlands. Fallen trees and broken branches were often buried by the river sediments. Nearby volcanoes erupted numerous times. These eruptions blanketed the area in volcanic ash with a high silica content.

Rapid burial allowed the plant debris to escape destruction by oxygen and insects. The soluble ash was dissolved by groundwater flowing through the sediments. The dissolved ash served as a source of silica that replaced the plant debris, creating petrified wood. Trace amounts of iron, manganese and other minerals were included in the silica and gave the petrified wood a variety of colors. These sediments, plant debris and volcanic ash became part of a rock unit known today as the Chinle Formation. 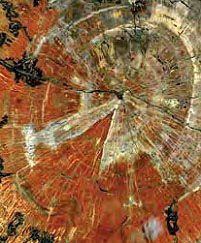 Photograph of a polished crosssection of a petriﬁed log from Arizona. You can see the structure of the wood and even insect borings. Image by Michael Gäbler.

Petrified wood is not rare. It is found in volcanic deposits and sedimentary rocks at many of locations worldwide. It is sometimes found where volcanic activity covered plant material with ash, mudflows or pyroclastic debris. It is found where wood in sedimentary deposits was replaced by minerals precipitated from groundwater. It is especially abundant around coal seams, although many of the wood specimens in these locations are casts and molds rather than petrifications.

In the United States, noteworthy locations where abundant fossilized wood can be seen include:

Petrified Wood by Many Other Names 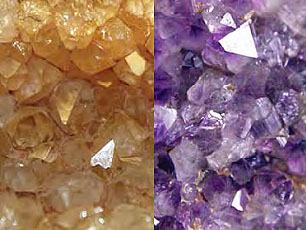 Some petriﬁed logs contain a spectacular surprise. Cavities within them served as crystallization locations for quartz crystals such as the citrine (yellow, left ) and amethyst (purple, right) shown here. Images by Petriﬁed Forest National Park.

Petrified wood is often used in lapidary work. It is cut into shapes for making jewelry, sawn into blocks to make bookends, sawn into thick slabs to make table tops, and sawn into thin slabs for clock faces, cabochons and many other crafts. Small pieces of petrified wood can be placed in a rock tumbler to make tumbled stones. Only a small fraction of petrified wood is suitable for lapidary work. Poorly preserved specimens, those with lots of voids or closely spaced fractures do not polish well or break while being worked. Workable specimens with spectacular color can sell for over $100 per pound.