Chalcedony /kælˈsɛdəni/ is a cryptocrystalline form of silica, composed of very fine intergrowths of the minerals quartz and moganite. These are both silica minerals, but they differ in that quartz has a trigonal crystal structure, while moganite is monoclinic. Chalcedony’s standard chemical structure
(based on the chemical structure of quartz) is SiO2 (silicon dioxide).

Chalcedony has a waxy luster, and may be semitransparent or translucent. It can assume a wide range of colors, but those most commonly seen are white to gray, grayish-blue or a shade of brown ranging from pale to nearly black.

The name chalcedony comes from the Latin chalcedonius (alternatively spelled calchedonius). The name appears first in Pliny the Elder’s Naturalis Historia as a term for a translucid kind of Jaspis. The name is probably derived from the town Chalcedon in Asia Minor. A little later the Greek word khalkedon (χαλκηδών) appears in the Book of Revelation (Apc 21,19). It is a Hapax legomenon, a word found nowhere else, so it is impossible to tell whether the precious gem mentioned in the Bible is the same mineral known by this name today.

Agate is a variety of chalcedony with multi-colored curved or angular banding. Fire agate shows iridescent phenomena on a brown background; iris agate shows exceptional iridescence when light (especially pinpointed light) is shone through the stone. Landscape agate is chalcedony with a number of different mineral impurities making the stone resemble landscapes.

Aventurine is a form of chalcedony, characterized by its translucency and the presence of platy mineral inclusions that give a shimmering or glistening effect termed aventurescence. Chrome-bearing fuchsite (a variety of muscovite mica) is the classic inclusion, and gives a silvery green or blue sheen. Oranges and browns are attributed to hematite or goethite.

Chrysoprase (also spelled chrysophrase) is a green variety of chalcedony, which has been colored by nickel oxide. (The darker varieties of chrysoprase are also referred to as prase. However, the term prase is also used to describe green quartz, and to a certain extent is a color-descriptor, rather than a rigorously defined mineral variety.)

Moss agate contains green filament-like inclusions, giving it the superficial appearance of moss or blue cheese. There is also tree agate which is similar to moss agate except it is solid white with green filaments whereas moss agate usually has a transparent background, so the “moss” appears in 3D. It is not a true form of agate, as it lacks agate’s defining feature of concentric banding.

Mtorolite is a green variety of chalcedony, which has been colored by chromium. Also known as chrome chalcedony, it is principally found in Zimbabwe. 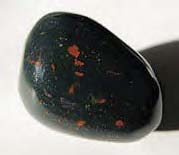 Heliotrope is a green variety of chalcedony, containing red inclusions of iron oxide. These inclusions resemble drops of blood, giving heliotrope its alternative name of bloodstone. A similar variety, in
which the spots are yellow instead of red is known as plasma.

Carnelian (also spelled cornelian) is a clear-to-translucent reddishbrown variety of chalcedony. Its hue may vary from a pale orange, to an intense almost-black coloration. Similar to carnelian is sard, which is brown rather than red. 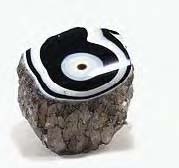 As early as the Bronze Age chalcedony was in use in the Mediterranean region; for example, on Minoan Crete at the Palace of Knossos, chalcedony seals have been recovered dating to circa 1800 BC. People living along the Central Asian trade routes used various forms of chalcedony, including carnelian, to carve intaglios, ring bezels (the upper faceted portion of a gem projecting from the ring setting), and beads that show strong Greco-Roman influence.
Fine examples of first century objects made from chalcedony, possibly Kushan, were found in recent years
at Tillya-tepe in north-western Afghanistan. Hot wax would not stick to it so it was often used to make seal impressions. The term chalcedony is derived from the name of the ancient Greek town Chalkedon in Asia Minor, in modern English usually spelled Chalcedon, today the Kadýköy district of Istanbu.

At least three varieties of chalcedony were used in the Jewish High Priest’s Breastplate. (Moses’ brother Aaron wore the Breastplate, with inscribed gems representing the twelve tribes of Israel). The Breastplate included jasper, chrysoprase and sardonyx, and there is some debate as to whether other agates were also used.

In the 19th century Idar-Oberstein, Gemany became the world’s largest chalcedony processing center, in particular agates. Most of these agates were from Latin America, in particular Brazil. Originally the agate carving industry around Idar and Oberstein was driven by local deposits that were mined in the 15th century. Several factors contributed to the re-emergence of Idar-Oberstein as agate center of the world: ships brought agate nodules back as ballast, thus providing extremely cheap transport. Also, cheap labor and a superior knowledge of chemistry allowing them to dye the agates in any color with processes that were kept secret helped. Each mill in Idar Oberstein had four or five grindstones. These were of red sandstone, obtained from Zweibrücken; and two men ordinarily worked together at the same stone.