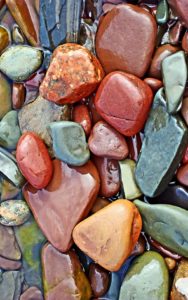 What gives rocks and minerals their colors?

The color can be caused by trace or minor elements in the gemstone. Cr, Ti, Mn, Fe, Co, Cu and a few other metals have strong color control, as does their oxidation state. eg. chrome and titaniaum gives the color of ruby, iron gives the color of olivine. Another effect is disruption of the crystal lattice, e.g. by heat, internal radiation, artificial radiation or physical shock.

Then there is the intrinsic molecular structure of the mineral itself, as in moonstone. Schiller effect, and similar arrays of color can be caused by optical interference between micocrystalline twins or microscopic intergrowths of two similar minerals, as in various varieties of feldspar. Other effects are pleochroism (Alexandrite), trichroism (Tanzanite), chattoyance (Tourmaline), and microscopic inclusions (various forms of silica).

Iron existing in rocks gives various and deepening colors of red. Copper creates blues and greens. Manganese and cobalt for pink, and chromium for deep green.

Idiochromatic minerals are “self colored” due to their composition. The color is a constant and predictable component of the mineral. Examples are blue Azurite, red Cinnabar, and green Malachite.

Allochromatic minerals are “other colored” due to trace impurities in their composition or defects in their structure. In this case, the color is a variable and unpredictable property of the mineral. Examples are the blue in Amazonite (orthoclase), yellow in Heliodor (spodumene) and the rose in rose quartz.

Pseudochromatic minerals are “false colored” due to tricks in light diffraction. In these cases, color is variable but a unique property of the mineral. Examples are the colors produced by precious opal and the shiller reflections of labradorite.

Regardless of their color and chemical composition, all earthly rocks are formed in one of three ways. Sedimentary rocks are formed from compressed sand and dust, while igneous rocks are volcanic in origin and are composed of cooled magma. Metamorphic rocks are named because they changed states in the past due to high temperature and pressure.