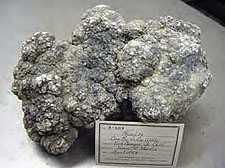 Howlite is our club stone and used to be found in the Tick Canyon area, however the area is now closed.

Howlite, a calcium borosilicate hydroxide, is a borate mineral found in evaporate deposits. Howlite was discovered near Windsor, Nova Scotia in 1868 by Henry How (1828–1879), a Canadian chemist, geologist, and mineralogist. How was alerted to the unknown mineral by miners in a gypsum quarry, who found it to be a nuisance. He called the new mineral silico-boro-calcite; it was given the name howlite by James Dwight Dana shortly thereafter.

The most common form of howlite is irregular nodules, sometimes resembling cauliflower. Crystals of howlite are rare, having been found in only a couple localities worldwide. Crystals were first reported from Tick Canyon, California, and later at Iona, 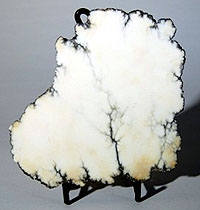 Nova Scotia. Crystals reach a maximum size of about 1 cm. The nodules are white with fine grey or black veins in an erratic, often web-like pattern, opaque with a sub-vitreous luster.

Howlite is commonly used to make decorative objects such as small carvings or jewelry components. Because of its porous texture, howlite can be easily dyed to imitate other minerals, especially turquoise because of the superficial similarity of the veining patterns.

The dyed howlite (or magnesite) is marketed as turquenite. Howlite is also sold in its natural state, sometimes under the misleading trade names of “white turquoise” or “white buffalo turquoise,” or the derived name “white buffalo stone.” 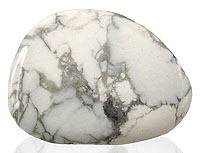