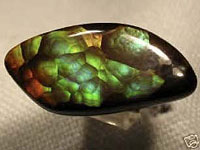 Fire Agate, a variety of chalcedony, is a semi-precious natural gemstone found only in certain areas of northern Mexico and the southwestern United States. Approximately 24-36 million years ago these areas were subjected to massive volcanic activity during the Tertiary Period. The fire agates were formed during this period of volcanism when hot water, saturated with silica and iron oxide, repeatedly filled cracks and bubbles in the surrounding rock. 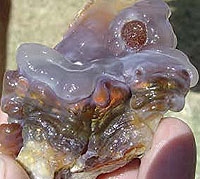 Schiller effect as found in mother-of-pearl, is caused by the alternating silica and iron oxide layers which diffract and allow light to pass and form interference of colors known as fire. There is no actual object inside the stone, this special effect arises from light interference within the microstructure layering of the gem.

What also makes fire agates unique is that they are only found in the south western USA and northern Mexico. Unlike agates which are found in many parts of the world and were known and adored by ancient civilizations such as the Romans and Greeks, fire agates are a relatively new gemstone. They were discovered in the 1950s, but their success as commercially sold gemstones didn’t take off until the late 1960s. Today they can be worth from 35$-500$ per carat 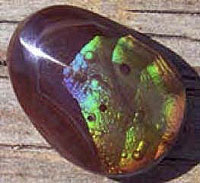 depending on quality and color.

The place to prospect for fire agates in the USA is Maricopa County, Arizona. There are a number of mines in the area, but only one that is open to the public. The Opel Hill Mine is located off Wiley Well road near interstate ten. The nearest town is Palo Verde. This mine is very different from other public mines which are often organized, have facilities and support small industries. On the contrary the Opel Hill Mine is more of a claim than a mine.

It is how one imagines gemstone prospecting was in its glory days and how it should be. You will need to take your own tools such as hammer, chisel, wire brush and gloves. You will also need buckets to carry the stones. If you prefer not to dig there are also piles of tailing to sift 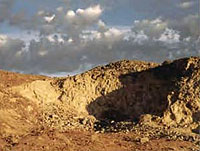 through that other prospectors have excavated. A good tip when digging for fire agates is to look under rocks that are covered in white calcite. Because the mine is located miles from the nearest town you will also need to take food, drink and any other supplies. People are also allowed to camp for free on the mine site.