What is Mohs Hardness Scale?

The Mohs scale of mineral hardness characterizes the scratch resistance of various minerals through the ability of a harder material to scratch a softer material. It was created in 1812 by the German geologist and mineralogist Friedrich Mohs and is one of several definitions of hardness in materials science. The method of comparing hardness by seeing which minerals can scratch others, however, is of great antiquity, having been mentioned by Theophrastus in his treatise On Stones, c. 300 BC, followed by Pliny the Elder in his Naturalis Historia, c. 77 AD.

The Mohs scale of mineral hardness is based on the ability of one natural sample of matter to scratch another mineral. The samples of matter used by Mohs are all different minerals. Minerals are pure substances found  in nature. Rocks are made up of one or more minerals.

“Hardness” is the resistance of a material to being scratched. The test is conducted by placing a sharp point of one specimen on an unmarked surface of another specimen and attempting to produce a scratch. Here are the four situations that you might observe when comparing the hardness of two specimens:

Hardness Variations in a Single Mineral

Minerals that are part of a solid solution series can change in hardness as the composition varies. Atomic bonds between some elements are stronger than others. An example is garnet which has a composition of X3Y2(SiO4)3 where X can be Ca, Mg or Fe and Y can be Al, Fe or Cr. Garnets with different compositions have different hardness. Garnets range in hardness from 6.5 to 8.

Weathering can also influence the hardness of a mineral. Weathering usually changes a mineral’s composition with the weathering product usually softer than the original material. When testing the hardness or streak or other property of a mineral, the best way to test is on a freshly broken surface that has not been exposed to weathering.

Mohs Hardness Scale is named after its inventor, Friedrich Mohs. This means that an apostrophe is not needed when typing the name of the test. “Moh’s” and “Mohs’ ” are incorrect. 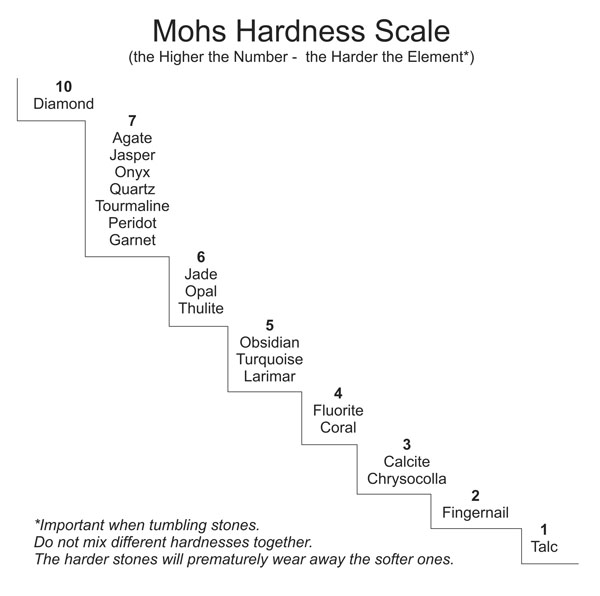